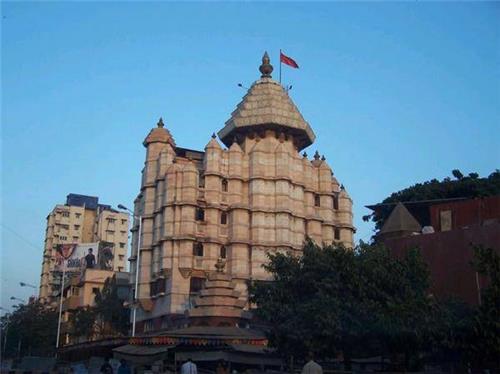 Maharashtra has the biggest numbers of devotees of Lord Ganesha and Mumbai houses the biggest and the most famous site completely dedicated to the Lord since the last two century. The Siddhi Vinayak Temple is undoubtedly one of the most sacred places not only in Mumbai but also in India. Constructed in 1801 on the day of Kartik Shuddha Chaturdashi the temple is located at Prabhadevi in Mumbai and established by the famous contractor and builder Shri. Laxman Vithu Patil. The entire project was funded by a local rich woman Smt. Deubai Patil.

Deubai Patil was childless, knowing the pain of having no off-spring; she wanted to do something for the childless women. Hence, she built the temple wishing the Lord Ganesha would grant the boons of children to the barren women. Legend also has it that Ramakrishna Jambhekar Maharaj, a famous disciple of the Hindu saint Swami Samarth, buried two sacred idols in front of the already established deity of the temple to follow his guru’s order. He vaticinated that after 21 years of this burial, there would a Mandar tree grow and a Svayambhu Ganesha would be sitting on its branches.

The idol of Siddhivinayak was made up by carving out a single black stone. The Ganapati has an unusual appearance in this temple. The four hands of the idol hold a lotus, an axe, a rosary and a bowl of Modaka (his favourite sweet preparation) respectively. A snake lies on his left shoulder and his forehead has an image of eye which resembles the Third Eye of Lord Shiva. Two goddesses, Riddhi and Siddhi sit on the both sides of Ganapati. The presence of these goddesses the temple is called the Siddhivinayak Temple.

In the early 19th century, the temple faced water-scarcity and to resolve the issue a lake was dug by Nardulla, but after a few years the lake was filled up and now the land is not a part of the main temple any more. The popularity of the temple started increasing during the decades of ‘50s and ‘60s as more and more people started visiting the place. In 1975, the reputation of the Siddhi Vinayak Temple of Prabhadevi reached a new high and became a must-visit place of the city of Mumbai.

Importance of Siddhivinayak Temple in Society 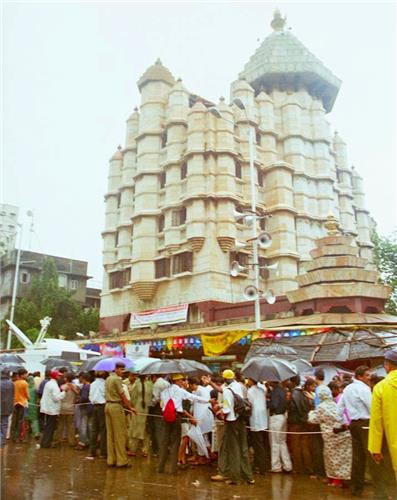 The Siddhi Vinayak Temple has a marvelous popularity not among the common devotees only but among the elite circle of the country also. Celebrities particularly from the film industry of Bollywood often visit the temple to offer Puja and to get the blessings from the Lord Ganapati. The idol has a reputation of being very auspicious and awake and it is believed that Siddhivinayak also known as “Navasacha Ganapati” bestows when a wish is genuinely prayed. The Siddhivinayak Temple has the richest temple trust in Mumbai which receives around Rs. 100-150/- million each year.

Facilities Available at the Siddhivinayak Temple

The Siddhivinayak Temple has an inbuilt rest house and first aid facilities for the devotees.  The long queue of the standing visitors and devotees right from the busy-road side to the temple gate is a regular incident in the city of Mumbai.